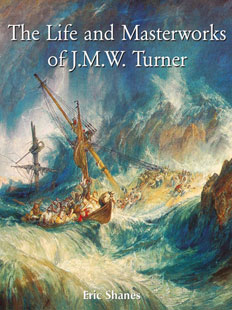 Temporis - The Life and Masterworks of J.M.W. Turner

At fifteen, Turner was already exhibiting View of Lambeth. He soon acquired the reputation of an immensely clever watercolourist. A disciple of Girtin and Cozens, he showed in his choice and presentation of theme a picturesque imagination which seemed to mark him out for a brilliant career as an illustrator. He travelled, first in his native land and then on several occasions in France, the Rhine Valley, Switzerland and Italy. He soon began to look beyond illustration. However, even in works in which we are tempted to see only picturesque imagination, there appears his dominant and guiding ideal of lyric landscape. His choice of a single master from the past is an eloquent witness for he studied profoundly such canvases of Claude as he could find in England, copying and imitating them with a marvellous degree of perfection. His cult for the great painter never failed. He desired his Sun Rising through Vapour and Dido Building Carthage to be placed in the National Gallery side by side with two of Claude’s masterpieces. And, there, we may still see them and judge how legitimate was this proud and splendid homage. It was only in 1819 that Turner went to Italy, to go again in 1829 and 1840. Certainly Turner experienced emotions and found subjects for reverie which he later translated in terms of his own genius into symphonies of light and colour. Ardour is tempered with melancholy, as shadow strives with light. Melancholy, even as it appears in the enigmatic and profound creation of Albrecht Dürer, finds no home in Turner’s protean fairyland – what place could it have in a cosmic dream? Humanity does not appear there, except perhaps as stage characters at whom we hardly glance. Turner’s pictures fascinate us and yet we think of nothing precise, nothing human, only unforgettable colours and phantoms that lay hold on our imaginations. Humanity really only inspires him when linked with the idea of death – a strange death, more a lyrical dissolution – like the finale of an opera.


About the author:
Eric Shanes is a leading authority on J.M.W. Turner, and is himself a painter. He was the founding Editor of Turner Studies, a journal published by the Tate Gallery, London. He is a Vice- President of the Turner Society, and is currently its Chairman. He organised the Turner: The Great Watercolours exhibition held at the Royal Academy of Arts in London to commemorate the 150th anniversary of the death of the painter in 2000-2001.

Eric Shanes has also written best-selling books on Constantin Brancusi, Salvador Dalí, David Hockney, Warhol and Pop Art and on the Impressionists in London. He has published widely on contemporary art issues, and is much in demand as a lecturer on art all over the world.