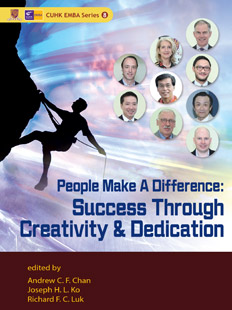 The EMBA Forum is one of the major activities of EMBA Program of The Chinese University of Hong Kong where to share their valuable experiences, insights and wisdoms with EMBA alumni and other forum participants.

Nine speeches of the invited guests are compiled in this book:


About the editors:
Professor Andrew C. F. Chan (陳志輝), SBS, JP, is the Director of EMBA Program in the Chinese University of Hong Kong (CUHK). On 1 July 2010, Professor Chan took up the headship of Shaw College, CUHK. Professor Chan excels in teaching and was awarded the Vice-Chancellor’s Exemplary Teaching Award in 2001 and 2009. Professor Chan has been active in participating in public service. From 1999 to 2005, he was Chairman of the Hong Kong Consumer Council while from 2004 to 2010, he was Chairman of the Hong Kong Deposit Protection Board; and from 2005 to 2012 he was a Member of the Electoral Affairs Commission. Currently, he is Chairman of Chinese Medicine Council and Process Review Committee of Hong Kong Monetary Authority. In addition, he is Director of Hong Kong Applied Science and Technology Research Institute Company Limited (ASTRI). He is also Committee Member of Clearing and Settlement Systems Appeals Tribunal of Hong Kong Monetary Authority, Member of Chinese Medicine Development Committee, and Quality Tourism Services (QTS) Committee. Prof. Chan has coordinated and hosted the popular TV and radio programmes ‘Talking to CEOs’ and ‘New Thinking in Management’, which are aired on RTHK Radio, Cable TV, now TV and bbTV.

Mr. Richard F. C. Luk (陸仿真) was former Director of the HKSAR Government’s Economic and Trade Office in Chengdu. He joined Government as an Assistant Labour Officer in 1977. In 1980, he quit the job that he loved to pursue religious studies at the Trinity Evangelical Divinity School in Deerfield, Illinois USA. Then in 1986, he joined Government again as an Administrative Officer. During the following 23 years as a career civil servant, he held responsibilities in a wide range of fields. He worked in various posts in home affairs: twice as District Officer, first in Wong Tai Sin and, after some years, Tsuen Wan. He also worked on district council policy and in rural affairs. He worked in civil service personnel management, and on salaries review. Other major responsibilities during his career included company and securities legislation, education, trade and industry, civil aviation, consumer protection, and SARS review. His final assignment was to set up the HKSAR Government’s Economic and Trade Office in Chengdu, where he was Director from 2006 to 2009. He returned to Hong Kong upon retirement in August 2009.