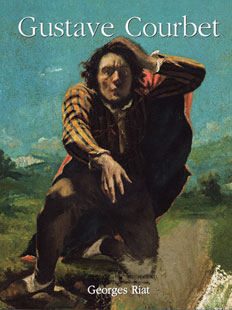 Ornans, Courbet’s birthplace, is near the beautiful valley of the Doubs River, and it was here as a boy, and later as a man, that he absorbed the love of landscape.

He was by nature a revolutionary, a man born to oppose existing order and to assert his independence; he had that quality of bluster and brutality which makes the revolutionary count in art as well as in politics. In both directions his spirit of revolt manifested itself. He went to Paris to study art, yet he did not attach himself to the studio of any of the prominent masters. Already in his country home he had had a little instruction in painting, and preferred to study the masterpieces of the Louvre. At first his pictures were not sufficiently distinctive to arouse any opposition, and were admitted to the Salon. Then followed the Funeral at Ornans, which the critics violently assailed: “A masquerade funeral, six metres long, in which there is more to laugh at than to weep over.” Indeed, the real offence of Courbet’s pictures was that they represented live flesh and blood. They depicted men and women as they really are and realistically doing the business in which they are engaged. His figures were not men and women deprived of personality and idealised into a type, posed in positions that will decorate the canvas. He advocated painting things as they are, and proclaimed that la vérité vraie must be the aim of the artist. So at the Universal Exposition of 1855 he withdrew his pictures from the exhibition grounds and set them in a wooden booth, just outside the entrance. Over the booth he posted a sign with large lettering. It read, simply: “Courbet – Realist.” Like every revolutionary, he was an extremist. He ignored the fact that to every artist the truth of nature appears under a different guise according to his way of seeing and experiencing. Instead, he adhered to the notion that art is only a copying of nature and not a matter also of selection and arrangement. In his contempt for prettiness Courbet often chose subjects which may fairly be called ugly. But that he also had a sense of beauty may be seen in his landscapes. That sense, mingled with his capacity for deep emotion, appears in his marines – these last being his most impressive work. Moreover, in all his works, whether attractive or not to the observer, he proved himself a powerful painter, painting in a broad, free manner, with a fine feeling for colour, and with a firmness of pigment that made all his representations very real and stirring.


About the author:
Georges Riat studied literature and history and was curator at the National Library in France. Specialising in the conservation of engravings at the National Library, Riat could admire Ruysdaël’s engravings and wrote a magnificent monograph on this subject. He was a respected art historian and wrote numerous articles in the Gazette des arts. He felt close to Courbet and wrote this monograph until the end of his life.