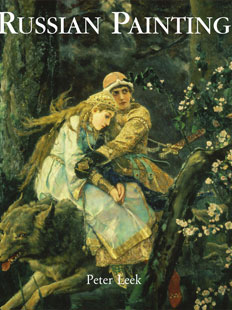 From the 18th century to the 20th, this book gives a panorama of Russian painting not equalled anywhere else. Russian culture developed in contact with the wider European influence, but retained strong native intonations. It is a culture between East and West, and both influences in together. The book begins with Icons, and it is precisely Icon-painting which gave Russian artist their peculiar preoccupation with ethical questions and a certain kind of palette. It goes on the expound the duality of their art, and point out the originality of their contribution to world art. The illustrations cover all genres and styles of painting in astonishing variety. Such figures as Borovokovsky, Rokotov, Levitsky, Brullov, Fedatov, Repin, Shishkin and Levitan and many more are in these pages.


About the author:
Peter Leek is a British Art historian who has participated in the publication of a number of works recognised by his peers.